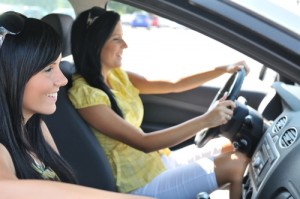 As a parent, there may be nothing scarier than seeing your child behind the wheel of a vehicle for the first time. This is understandable given the obvious risks involved in operating a 2,000 pound machine on the open road. And according to the National Safety Council, 50% of all teen drivers are involved in some type of car accident before finishing high school. As reported by the CDC, in 2013, over 2,100 teenagers between 16 and 19 years of age were killed from injuries caused in a car accident, and over 243,000 were sent to emergency rooms for injuries.

Since it is your job as a parent to protect your children, understanding and promoting safe driving practices for teen drivers is extremely important. Along with proper instruction and safety regulations, there are many recent initiatives working to increase safety for teen drivers.

The NHTSA works to remind teenage drivers and parents about the importance of avoiding distractions while behind the wheel. Their “5 to Drive” campaign encourages parents to talk to teen drivers about the rules of the road. This campaign address the five most dangerous and lethal distractions for teen drivers. These 5 rules include:

The rules listed above include behaviors that are illegal either nationally or in certain states. Since teenagers are prohibited from drinking alcohol, this rule is especially important. While the rules may seem like common sense, as a parent it is important to remind your teenager of these rules frequently. Talking about these rules could be the difference between life or death in some cases.

The Teen Driver Source website is promoting a campaign to increase friendship and driving safety at the same time. The “Ride Like A Friend. Drive Like You Care” campaign encourages safe behaviors behind the wheel or in the passenger seat. This initiative is perfect for maintaining proper driver awareness, while also encouraging teens to be helpful passengers. This website features many downloadable tools and paperwork to help those promote safe driving at school and to other young drivers.

DriveitHome by the National Safety Council is an initiative for teens and parents focused on supporting new drivers. The initiative includes free resources for parents, along with a place for parents to share and exchange ideas about how to increase safety for teen drivers.

Teen Driver Safety – Which Teens Are At Highest Risk?
Though all teen drivers are at risk behind the wheel, statistics show that some are at higher risk than others. As reported by the CDC, those at highest risk include:

National Teen Driver Safety Week is promoted in October each year. Yet it’s important to keep an awareness of teen driver safety top-of-mind at all times. Parents, talk to your children about the importance of distraction-free driving and obeying regulations and laws. As a friend or young driver, you can help by promoting safe driving practices at school and among your peer group.