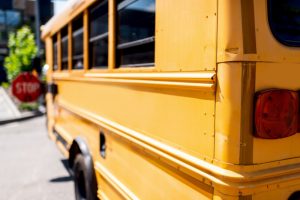 The Carrollton bus crash of 1988 was one of the most tragic vehicular collisions to occur in the 20th century. On the evening of May 14th, a school bus transporting 67 people, both children and adults, was hit head-on by a drunk driver traveling the wrong direction on Interstate 71. 27 people lost their lives while the intoxicated operator of the other vehicle walked away slightly injured.

After the accident, the drunk driver, Larry Mahoney, was sentenced to 16 years in prison on 27 counts of manslaughter. While the person who caused the deaths of 27 people was reprimanded, many parents and family members still felt that more needed to be done to ensure a tragedy like the Carrollton bus crash never happened again.

The bus crash became a catalyst for a wide variety of updates to busing safety standards and an increase in activism against drunk driving. Since the Carrollton bus crash, Kentucky specifically has enforced higher safety standards for bus travel and harsher drunk driving penalties. Some of the rules and regulations are more strict than any other state in the country. Follow along to learn more about how school buses and certain laws have changed since the Carrollton bus crash of 1988.

Changes to Bus Safety Standards Since the Carrollton Bus Crash

Prior to the Carrollton bus crash, most school buses did not have the safety standards that today’s school buses do. Before stricter safety standards were enforced, most Kentucky school buses used gasoline. Now, modern-day school buses run on the much less volatile diesel fuel. School bus gas tanks also have cages around them to protect them from being punctured. The cages are influenced directly from the Carrollton bus crash during which the gas tank was punctured. Now, Kentucky school buses also feature a fuel system that is designed to slow fuel leaks and prevent massive fuel loss from happening during a disastrous situation.

The punctured gas tank, paired with the highly flammable bus seat material, was a recipe for disaster. As the gasoline flowed from the punctured tank, sparks from the metal running against the ground ignited it. This combination of issues caused the bus to be engulfed in flames in minutes with the internal temperature of the bus rising to 2,000 degrees. Now, school bus seat material is made of non-flammable material. The same material used to protect the seats is also used on the floor of modern-day school buses. This change was made directly by the National Transportation Safety Board (NTSB) to affect all school buses in the country.

One of the biggest factors in the Carrollton bus crash that contributed to the deaths of 27 people was the limited number of emergency exits. At the time, the bus that was used to transport the group back from their trip to Kings Island only had two emergency exits — one at the front of the bus where people boarded and one at the back. Because the drunk driver hit the Carrollton bus head-on and pushed the gas tank back into the bus, the front door was unable to be used as an exit. This led to all 67 people on the bus trying to exit from a singular back door. A body jam occurred with the only adult to survive the crash exiting a window due to her small stature. Several students attempted to kick out windows to exit but were unsuccessful.

In addition to the increased number of emergency exits, updated material used on the flooring and in the seats, and gas tank regulation, school buses operating in the state of Kentucky must also have reflective tape around all emergency exits. A Kentucky-operated school bus also features a stronger body frame and the roof is able to resist collapsing in cases of impact and rollover. Strobe lights are also featured on the exterior of Kentucky buses to alert passing drivers to an incapacitated school bus.

Other Changes that Occurred After the Carrollton Bus Crash

Mothers Against Drunk Drivers (MADD) had already been working to raise awareness to the lives lost to drunk driving and reduce the number of hazards drunk drivers created. After the Carrollton bus crash, two mothers of children lost to the fire rose to national prominence within the organization and helped to strengthen the MADD initiative.

Karolyn Nunnallee, the mother of 10-year-old Patricia Nunnallee who lost her life on that fateful night, quickly became active in MADD. She eventually became the organization’s national president. Another victim’s mother, Janey Fair, would go on to become the national vice president. Fair was not only involved in MADD. She also headed the Kentucky Victims Coalition.

Quite a few other parents of victims also got involved with MADD on national and local levels. In 2013, MADD produced a documentary about the Carrollton bus crash. The documentary features victim statements and how the events changed the world. The documentary is titled Impact; After the Crash and is available online.

School bus and drunk driving regulations since the Carrollton bus crash of 1988 have only gotten better. Now, 31 years later, accidents involving bus crashes and drunk drivers are few and far between. However, they do still happen on occasion. When they do it’s important to have legal counsel familiar with the history and the laws surrounding school bus crashes.

If you, or a loved one, has been involved in a school bus crash, contact Cooper and Friedman. Our team of lawyers in Louisville, Kentucky can help represent you in court. We’ll fight for you to get the compensation you deserve. Contact us through our website or by calling 502-459-7555 today.