20 Terms You May Hear in the Courtroom and Should Know 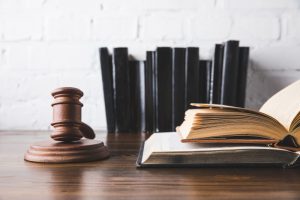 Appearing in court, as a defendant or plaintiff, can be stressful. This situation can be made even more stressful when you aren’t clear on what is being discussed. The legal system and court appearances are riddled with legal jargon. Not being aware of what certain courtroom terminology means can make an appearance even more difficult. While being able to follow along with what is being discussed can be crucial for your case, it is also important to be able to follow the conversation between lawyers, the judge, and other members of the court.

At Cooper and Friedman, we believe in transparency, which is why we want our clients to be educated on courtroom terminology. Below we’ve highlighted 20 terms you may hear in court and should know the meanings.

Depositions are spoken statements taken both under oath and outside of court. They give the defendant and plaintiff a broad idea of what the other will be saying during court proceedings. It is not uncommon for the plaintiff to get a deposition from the defendant and vice versa.

A summons is a legal document that requests a defendant appear in court. Summons are different than a subpoena in that it requests an appearance and is solely intended for a case defendant. A summons can be hand delivered by a sheriff, a server, or it can be mailed.

Pleadings refer to the documents that are filed with the court handling the case that give basic details on where each party stands. The term pleadings isn’t very common, but pleadings are important for every civil case.

A settlement is what occurs when either the plaintiff or defendant decides to come to terms in regards to their dispute outside of court. Settlements are usually in the form of a monetary payment to the affected party that satisfies them but does not require the party offering the settlement to admit fault.

A misdemeanor is a crime or punishable offense that requires one year, or less, of imprisonment. Common misdemeanor crimes include DUI, burglary, perjury, an assault that results in bodily injury, some cases of domestic violence, and obscenity.

Felonies, unlike misdemeanors, are more serious crimes that result in over a year of imprisonment when one is found guilty of the charge. Some felonies that are common include drug abuse, auto theft, arson, assault, manslaughter, rape, fraud, and forgery.

A lawyer can request a “move to strike” when something is said by a witness who is testifying that they do not want the jury to consider during their deliberations. The most common statements that are requested to strike from court records are opinions that witness give when they are not asked to do so.

Anyone who has seen a television show that is based around the court of law or a movie with a courtroom scene has heard a lawyer bellow “objection!” An objection is what an attorney may pose when they have an issue with the way the opposing party is cross-examining a witness or a witness makes a statement that is considered hearsay.

The term “sustained” is what a judge says when they agree with an objection. A sustained objection requires that the attorney doing the examination must rephrase their question or the witness being examined must restate their answer.

Closing arguments are the final statements made by the prosecutor and defense attorney after the two parties have made their cases, witnesses have all been called to the stand, and cross-examinations have been completed. These arguments often invoke emotion from the jury to sway their feelings on the case. As a result, this can benefit the prosecutor or defense attorney depending on who is speaking.

A mistrial is what occurs when a jury is unable to reach a unanimous decision, or verdict, on a case. A mistrial can be called after a jury has deliberated and is unable to make a decision as a whole. When a mistrial is declared the case is eligible to be retried in front of a completely different jury. Otherwise, the prosecution can choose to not move forward with the case.

“Voir Dire” refers to the selection of the jury through the process of questioning potential jurors. The questioning is done to ensure that the jury is made up of peers of the defendant who are qualified to form an unbiased opinion based on the facts presented during the trial. Voir Dire is also done to make sure that no juror has any conflicting beliefs or personal relationships with the plaintiff or defendant in the court case.

During a trial, many other terms will be used throughout the proceedings; however, these 20 are key terms that anyone going to court should have knowledge of. Knowing this courtroom terminology will enable clients to follow along during the case without being confused. For more information on court terms, click here to read the glossary of legal terms collected by the United States Courts.

At Cooper and Friedman, we have over 45 years of combined experience in courtrooms across Indiana and Kentucky. We are here to help our clients get the best results possible in court. Furthermore, we believe knowledge of courtroom terminology helps ease client anxiety. If you are in a situation where you need a lawyer, contact us today. We offer free case consultations and are happy to listen to what is going on, so we can help. Contact us through our website or by calling 502-449-7555 today.