August 11, 2016 – Louisville personal injury law firm Cooper and Friedman PLLC is sponsoring the 15th Annual Double Bogey Invitational on Saturday, August 13, 2016, starting at 8 a.m. This golf tournament fundraiser will take place at the Golf Club of Dublin, Ohio. This event is raising money for Families for a Cure, a non-profit organization that provides funds to cancer researchers and supports patients fighting cancer.

One of the Families for a Cure founders, Eric Friedman, is brother to Hal Friedman, a partner at Cooper and Friedman Attorneys at Law in Louisville, Kentucky. Eric and Hal got involved in raising money for cancer research as a way to honor the memory of their deceased parents Malcolm and Joyce Friedman, both of whom battled and eventually died from the disease. 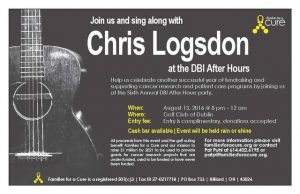 Eric Friedman originally founded the MJF Fund for Cancer Research in memory of Malcolm and Joyce Friedman. And in 2006 his efforts expanded when he joined forces with friend Pat Puhl to create the Double Bogey Invitational as an annual cancer fundraising event. In 2009 Families for a Cure was founded and the organization is focused on raising at least $1 million for cancer research by 2021.

Following the tournament, everyone is invited to relax and socialize at an after-hours party, which includes music and entertainment, and is funded in part by the Cooper and Friedman law office, a personal injury law firm serving people across Kentucky and Southern, Indiana. This is the sixth year that the Double Bogey Invitational includes an after party. This year’s entertainment features a sing along with Columbus, Ohio-area musician, singer, songwriter, entertainer, and guitarist Chris Logsdon.

The after party event, held at the Golf Club of Dublin, on Saturday, August 13, 2016, from 8 p.m. until midnight, is free and open to anyone interested in learning more about the important work Families for a Cure is currently doing. For more info, visit familiesforacure.org and follow Families for a Cure on Facebook.